Three great videos about the pilot locations of MEMEX 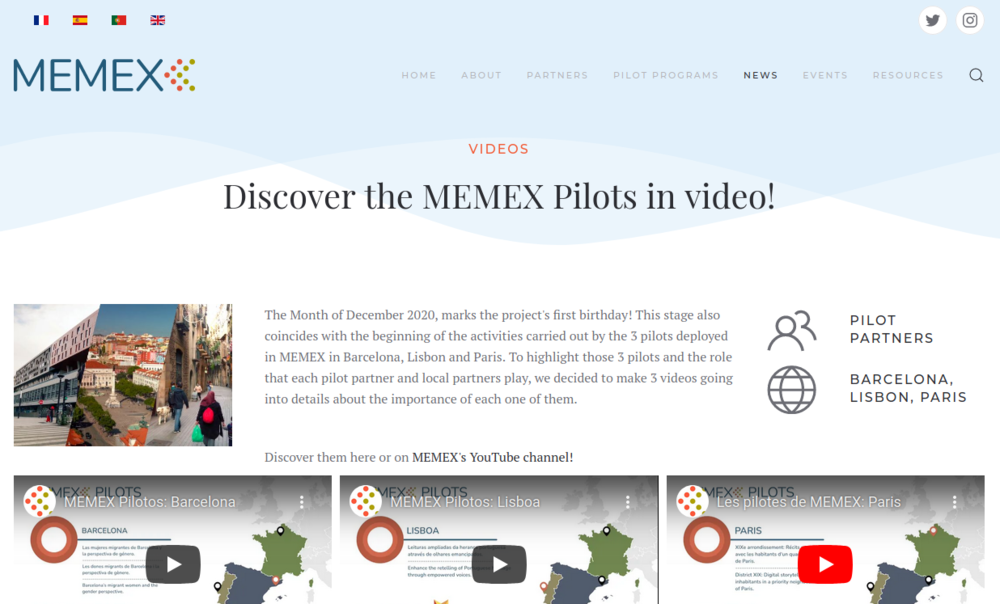 We recently published three videos on the pilot locations, Paris, Barcelona and Spain, of the MEMEX Project. This challenging collaboration effort came together during the second wave of COVID so a massive effort was needed by the Michael Culture Association, NOHO Limited, Fundacio Interarts per a la Cooperacio Cultural Internacional (InterArts), Mapas das Ideias and Dédale.

The MEMEX project promotes social cohesion through collaborative, heritage-related tools that provide inclusive access to tangible and intangible cultural heritage and, at the same time, facilitate encounters, discussions and interactions between communities at risk of social exclusion. These tools will empower communities of people with the possibility of welding together their fragmented experiences and memories into compelling and geolocalised storylines using new personalised digital content linked to the pre-existent European Cultural Heritage (CH). The tools of MEMEX will allow the communities to tell their stories and to claim their rights and equal participation in the European society. To this end, MEMEX will nurture actions that contribute to, rather than undermine, practices of recognition of differences by giving voice to individuals for promoting cultural diversity.

Researcher (Assistant Professor) in Computer Vision at the Istituto Italiano di Tecnologia (IIT). Stuart's research focus is on Visual Reasoning to understand the layout of visual content from Iconography (e.g. Sketches) to 3D Scene understanding and their implications on methods of interaction. He is a PI on the MEMEX RIA EU H2020 project for increasing social inclusion with Cultural Heritage and Co-PI on the RePAIR EU FET H2020 project for the reconstruction of frescoes. Stuart has previously held PostDoc positions at IIT, University College London (UCL) and the University of Surrey. Also, at the University of Surrey, Stuart was awarded his PhD on visual information retrieval for sketches. Stuart continues to hold an honorary position at UCL and UCL Digital Humanities. He also regularly organises workshops and conferences, most recently the Vision for Art (VISART) Workshop at ECCV'20 and British Machine Conference (BMVC) 2021.